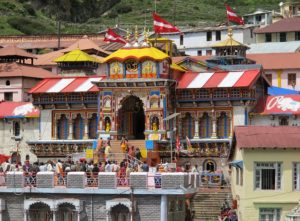 What can be more peaceful than a tour of India’s most famous pilgrimage centers, The Char Dham? People in India say that the journey of life is incomplete without the Char Dham Yatra. So everyone in their life should visit at least once to all these religious places.

Our company is one of the best in arranging pilgrimage tour for the people. Deciding which place to stay in, where to start the journey and the travel everything is provided to the pilgrims in order to make their Yatra much easier.

We also provide various tour packages and deals on accommodations and travels, which make the people to spend most of their time on darshans at each place without any stress. The main purpose of our company is to provide the best travel as well as darshan experience to the people so that they can be devoted to their prayers.

We provide best deals and packages for different pilgrim sites such as Char Dham Yatra, Ashtavinayal darshan and also the Jyotirlinga tour. Each of these places can be visited with ease and the traveling will be as smooth as expected.

The tour packages are at very affordable rates, accommodation and food everything is taken care of by the company. While the darshan starts, we take care of the travel which people have to do for reaching the darshan place.

Some of the beautiful sthals which we offer are Char Dham Yatra, Ashtavinayak Darshan and Jyotirlinga tour.

The Char Dham refers to the “four abodes”, which is a set of four pilgrimage places in India. Hindus in India especially the Vaishnavite believe that visiting these places will help them to attain “Moksha” (salvation). Char Dham as defined by Adi Shankaracharya comprises of four Vaishnavite pilgrimage center.

During winters, the sites of Chota Char Dham are closed due to the weather conditions. During winters these places face snowfall, hence they remain closed. But on the onset of summer, these sites are opened again.

To make the journey easier for the pilgrims, the Chardham Mahamarg Vikas Pariyojna was inaugurated on 23rd December 2016. This project helps to resolve the traveling problems and makes the tour an easy task for all the Hindu pilgrims.

The belief is that after visiting all the sites at once again the first one should be visited in order to complete the yatra. The order of visiting each temple is as follows.

The belief is that these idols are not man-made, they were naturally formed. Because of the belief, these idols are known as Swayambhu, which in Sanskrit means self-existent. Hence, the name totally compliments the reason.

Jyotirlinga is a holy representation of God Shiva. The term Jyotirlinga is coined with two words, where Jyoti means “radiance” and lingam means “image” of Lord Shiva. Hence, the meaning Radiant Sign of the Almighty Shiva is the true meaning of the word. There are twelve Jyotirlinga sites in India.

The twelve Jyotirlingas are:

All these sites are special because they symbolize the nature of Lord Shiva. So to see different avatars of Lord Shiva visiting each place in the list is mandatory.

The company gives a tour of all these shrines and a dedicated darshan as well. We give the pilgrims the time to have a proper darshan at each of these sthals and lift up their spirits. Taking them back from the shrines back to their hotel rooms safely is one of the best facilities we provide.

The best part about the company is we offer cheap and affordable packages so that the people don’t feel their accommodation as a burden.

Apart from these shrines, the company also provides a religious tour in North India. The various beautiful temples and shrines you can visit them all. These tours also help in learning the mythological stories behind each and every place. Hence, the whole trip can be a religious as well as an adventure of history trip.